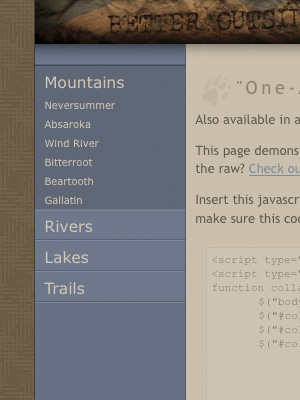 Accordion menus, collapsing navigation, f’eh. Everyone’s got their own version, including the one native to jQuery UI. I’ve never really been satisfied with any of them, however, so I took a stab at rolling my own. I built it in two versions, one that only allows you to have one navigation section open one at a time, and one that allows multiple sections.

If you have poor impulse control and just want to skip to the code demos, you can check out the implementations here:

Here’s the basic code that makes it happen. I’ll only outline the “one-at-a-time” implementation here, but the “many-at-a-time” version is remarkably similar. All these code examples are available on the demo pages as well.

First, use this HTML code, or something similar to it. Basically, what you need is a series of double-nested unordered lists with the proper ID.

Next, these are the raw CSS styles that you’ll need to create the effect. Once you understand what’s going on, feel free to customize these rules however you see fit.

Finally, insert this JavaScript in the <head> of your HTML page. Also, grab a copy of jQuery and make sure this code points to that file as well.

The above code adds an “enhanced” class to the <body> element, marks the first navigation section in the unordered list with a “selected” class, and hides all the remaining sections. When the user clicks on a section heading it hides any open navigation sections, reveals the section that corresponds to the clicked heading, and marks that section as selected.

If you want to see this basic code in action, visit the basic demo page or download these code examples for your own nefarious purposes.

There are a few things that make this collapsing navigation better than a lot of the other crud out there. While I certainly wouldn’t purport that this is the best of the best, I’ve found it to be perfectly suitable for many of my purposes.

It’s easy to implement and customize.

Just add the proper ID to a double-nested unordered list with the proper HTML markup, and you’re good to go. You’ll have to do some work with the CSS to get it to look good and behave just the way you want, but in the basic code example I’ve sketched out the behavioral CSS scaffolding that you’ll need to get off the ground. In the designed example I’ve compartmentalized the CSS rules across a few files, to clearly delineate what code applies to the navigation, and what is purely ornamentation.

I’ve tested these examples and they work perfectly in Safari 3.2.1, Firefox 3.0.6, Opera 9.63 and Internet Explorer 7.0. They work in IE 6.0 as well, with one small caveat: IE6 doesn’t support the :hover pseudo-class on any element other than <a> elements, and since the section headings use spans instead of hyperlinks, the hover state doesn’t work. This is a bummer, but if you tweaked the JavaScript to add an “ie-hover” class to the <span> element on hover, and if you defined that class in the CSS, you could totally work around this. For me it isn’t worth the effort, as I believe that IE6 users should be forced to browse the web in constant agony. For you, this activity could be a learning experience.

Simply bring in 46KB of jQuery hotness, and the JavaScript and CSS to make this puppy work weighs less than 5KB.

It degrades gracefully with JavaScript turned off.

All nested lists are displayed wide open by default, so all navigation items are available to the user. Additionally, when JavaScript is disabled the section headings are not hyperlinked and are not clickable, as one would reasonably expect, considering that the only reason they should be clickable is to toggle the list. Without JavaScript to collapse and uncollapse the navigation, the hyperlink would serve no purpose other than to confuse the user. Indeed, if something isn’t clickable in a particular use case, it shouldn’t have an affordance that suggests otherwise. This lack of attention to detail in so many slipshod JavaScript snippets annoys me to no end.

I achieve this effect by using <span> elements (rather than <a> elements) to wrap the first-level list items. These spans could certainly be replaced by something like a header element that would more semantically descriptive, but such is a task I leave up to the reader. Then, with JavaScript I add an “enhanced” class to the <body> element, which calls in the basic CSS styles that control the presentation of the first-level list items and make them behave as clickable headings. This abstraction of presentation and behavior ensures that the collapsing navigation works as expected in most cases, and that those browsing without JavaScript will enjoy an experience unsullied by irrelevant controls.

It behaves the way you think it should.

Which is more than you can say about a lot of collapsing menus out there.

The section headers aren’t clickable when they shouldn’t be clickable, such as when they’re already expanded in the “one-at-a-time” example, or in cases where JavaScript is disabled.

As with all of the things I design these days, I didn’t start with code when I set out to build this navigation. I started with sketching, which helped me better grasp the behavioral requirements of such a navigation scheme.

Sketching helped me realize one core problem that needed to be solved, that the first item in the list needed to be expanded by default. Indeed, there’s no reason that all navigation items should start out closed, as that’s lazy and inane. Second, this offers an affordance to the user, suggesting the behavior that can be expected from the other navigation items.

So that’s that. Visit the demo page to see the hotness stylized, or check out the basic code that makes the magic happen.