After two weeks of leading a jet-setter lifestyle, crisscrossing the country in economy class, and enjoying only the finest plastic cups of Canada Dry, I have returned home. Ahh, Hood River, where all the postal clerks know my name, I have the EDGE network all to myself, and there are no more than two places to eat in town.

Having flown on no less than eight flights and two different air carriers over the last couple weeks, I feel I am in a position to accurately report on the current state of air travel in our nation. Here’s the gist of it: Fewer flights, packed flights, longer flights. It’s a totally awesome combination, considering that you are free now even from the in-flight burden of consuming a bag of three broken pretzels. As far as I can tell, air carriers are running fewer flights to most destinations, and packing all of their remaining flights to maximum capacity. Every one of my eight flights was completely full, with additional travelers on standby in case of no-shows.

Now, a completely full flight takes a ridiculously long time to plane and deplane, so one would think that this, combined with a record number of delayed flights, would result in a cascading disaster of lateness. Not so! It seems the air carriers have taken into account the additional time it takes to load up all that extra meat, and have padded their schedules accordingly. If the flight before yours takes an abnormally long time to deplane, and your flight takes an abnormally long time to board, you’ll still likely arrive at your destination “on time”, as the travel times between cities have been arbitrarily increased to allow for these delays.

If your flight happens to board quickly, however, it just means more time sitting on the tarmac, waiting for your takeoff window. The good news is, this allows you all sorts of extra time to peruse Sky Mall, which currently features such awesome products as a colon-shaped brownie tray, litter boxes for one-legged cats, and Taylor Fay.

So where, you ask, did I travel during all this? Two weeks ago I had an incredibly early flight out of Portland, so I spent the previous night at the La Quinta near the airport to take advantage of their “Park and Sleep and Fly and Sleep and Park and Fly and Park” program. Thanks to an utterly bizarre celestial alignment I drove to Portland State University that night, and caught up with a Hopkins friend who I hadn’t seen in over ten years.

The following morning I flew from Portland to Dallas, met up with my cohort Jake Ingman, and flew to Austin for the SXSW Interactive design conference. For the next five days we drank obscene amounts of liquor, fed Mark Bixby obscene amounts of bacon, and occasionally talked about interactive design. We also cruised around in RVs and ice cream trucks, got kicked out of bars, rode giant wooden unicorns, and established Awesometown, USA (population: You).

After all that (there is a whole lot more to “that” than mentioned so far) I flew from Austin to Dallas, where I had a five-hour layover until my flight back to Portland. After reaching Portland I didn’t even bother driving back to Hood River, because the following morning I had to catch a flight to Minneapolis. Instead I once again spent the night in a king-sized Tempur-Pedic bed at La Quinta Portland, still confused, drunk and disoriented from SXSW.

I met up with Kate at the Minneapolis airport and we flew to Detroit, an airport that is so utterly dominated by Northwest Airlines that in the baggage claim they have a sign that says, “Lost or damaged baggage? Then fuck you!” We took a shuttle to Enterprise Rent-A-Wreck, who sent us away with a Grand Caravan and five children who needed a ride to soccer practice, and we then drove to Ann Arbor to visit the University of Michigan.

We spent the next four days in Ann Arbor, meeting with our graduate programs and eating Silvio’s Organic Pizza and wandering through cemeteries, until deciding that we just weren’t far enough south and needed to travel to Indiana. We headed back to Detroit and traded in the Grand Caravan for a Chevy Rollerskate, a deathtrap of a car that gets 32 mpg and would likely get lodged under an SUV in a crash, and drove to Bloomington to see what Indiana University is all about.

Indiana University is all about rain and “hoosiers”. We know what rain is, and there is apparently a lot of it. As for the hoosier, no one seems quite sure what to make of that. Fortunately Bloomington is wrought with delicious Thai and Indian food, which is simultaneously foreign and familiar for both Kate and I. Bloomington is also far enough south that McDonald’s has sweet tea on the menu, the student union has a Chick-Fil-A in the basement, and Kate swears that she will pick up a drawl if we happen to go to school there.

The sun shown beautifully on the Red Lobster the day we left Bloomington. Bound for Detroit to catch our evening flight back to Minneapolis, we stopped in Ypsilanti just so we could say we had been there (it’s called the Sufjan effect). From Minneapolis my flight to Portland was delayed, but by that time it was already so late and I had flown so much, that you could have told me our plane was infested with flaming poisonous snakes and tiny clones of Samuel L. Jackson and it still wouldn’t have fazed me.

Upon reaching Portland I took a shuttle to the hotel, thought wistfully of a giant Swedish mattress, but resolved to collect my Subaru and make the dark drive back to Hood River. Eight flights and two weeks later, I stumbled through my front door at two o’clock in the morning. 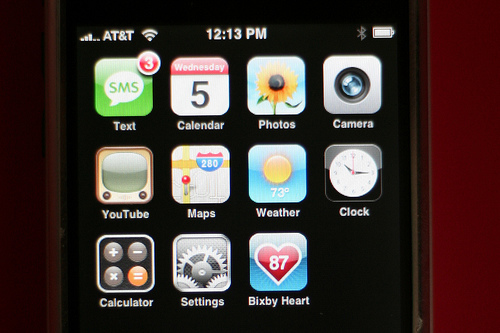 Jake and I are obviously up to no good.

Yesterday I got back from SXSW. It was an incredible time.

My last night in Austin I got a single hour of sleep.

Tomorrow Kate and I leave for Zion.

Also posted in Life | Comments Off on Transition

Last October I accidentally threw away my iPod Shuffle. This may sound like an interesting story, but more than anything it was dumb. Just dumb. Sure, it was just one of the old style Shuffles, the kind that was as big as a pack of gum which seemed really small for about fifteen minutes there, and I had already replaced it once after all the buttons had stopped working, but that little bastard still set me back $150 at the time.

Last week my new iPod Shuffle arrived, the latest version of the latest kind that has a built-in clip and comes with Apple’s new-style headphones and is about the size of a postage stamp if postage stamps were a quarter of an inch thick and cost $79. Honestly, this thing is small. I almost swallowed it just taking it out of the box.

Anywho, I love the new Shuffle. At first I had planned on getting a nano, seeing as how the cheapest model would be the same price that I paid for my original Shuffle. After I realized that for my purposes I would need an armband or some crazy carrying shit like that, and discovering that such nonsense would run me an extra $30 or so, the Shuffle and its handy clip started looking much more attractive. I don’t need much from an mp3 player… I just need something that makes noise in my ears while I’m at the gym. Until I can afford a personal trainer, an iPod it is.

Hence the Shuffle, which is of a size that is so ridiculously small that it makes you wonder why your headphones need to plug into anything anymore, or even need to have cords for that matter. I still don’t have a proper full-size iPod, partly because I have no real use for one in my regular life, and partly because I keep putting off the purchase, in the interest of getting the next latest-and-greatest edition from Apple. I’ve been waiting for the multi-touch iPod ever since the iPhone was announced, and I know now that it’s only a matter of time.

It’s amazing when you realize that the click wheel, which was quite possibly the most innovative UI development of the oughts, has already been rendered completely irrelevant by the very company that invented it in the first place.

In other news, a week from today I take off for my second shot at SXSW. My first time was a blast and I got to spend it with my fellow UI-geek friend (and occasional lover) Jake Ingman, along with Sally and a number of other great friends we made down there in Austin. Jake and I have known of each other’s existences since 2001, but we didn’t hook up until SXSW last year. We rekindled our relationship through the 37signals personal ads (this joke was funnier before they started running their Job and Gig Boards) on a thread about Jim Brandenburg, and we spent our downtime at “South By” sharing the same bed. Or staying up all night blogging and uploading photos to Flickr. What can I say, we were both hopeless romantics at the time.

Jake and I are both jammin’ down to SXSW again this year, only this time around we’ve got two beds between us. Kate assured me, however, that she would be totally okay if we decided to share again. I guess we’ll just have to see what Anne says about the whole deal. Seriously though, some things just get out of control down in Texas.