Hans and Umbach: Exploring the Boundary Between Physical and Digital

My final semester of graduate school is now long over, I have spent the last few weeks immersed in the awesome culture that is Adaptive Path, and yet embodied interaction continues to dominate my thoughts.

Today I have been reviewing my notes from the Hans and Umbach project, after using a terminal command to combine hundreds of text documents into a single file, which I converted to a PDF and loaded onto an iPad that I am currently borrowing from work. One thing that is striking, and perhaps disappointing, is that I originally set out on the modest goal of learning Arduino, hardware sketching and physical computing. Where others have made LED matrixes that let you play Super Mario Brothers, or tanks that they can control with an iPhone, I made a few LED mixers, interfaced with a 7-segment display, took apart a Super Nintendo controller, and played Pong with a Wii Nunchuk.

My results didn’t quite meet my initial expectations. Electronics, it turns out, is still an archaic craft wrapped in cloaks of obtuse language and user-hostile encodings, and is certainly an art unto itself. I realized that to produce the robust interactions I had intended, with all the nuance and detail with which I approach my screen-mediated design work, would take an entire career worth of learning and refinement.

So then, were my efforts with Hans and Umbach all for naught? I don’t believe so. Physical computing exists at the intersection of the physical and the so-called digital worlds, which is why I was originally so interested in studying it. In reflecting extensively on my own process of learning electronics, and simultaneously diving deep on academic research behind notions of embodiment, I came to realize that perhaps stumbling through the craft of linking these two worlds together wasn’t the best use of my strengths.

Because, I realized, the boundary between the physical and digital worlds was a false one.

Indeed, mentally compartmentalizing the physical from the digital makes sense from a computer science perspective, or from a system architecture perspective, but it is a wrong, dead-wrong approach for an interaction design perspective.

Every interaction, whether it is with a coffee cup or a keyboard or pixels on a screen, exists in the physical world, is perceived through our senses, is actively interpreted by us, and is thus rendered meaningful by our interpretation. Whether it is physical or digital, every interaction is embodied, as we only interact with the physical manifestations of digital information.

This was a surprising conclusion to reach, as the whole reason I set out on this inquiry was to prove that the interactions afforded by the devices at the Musee Mecanique were of a different class than those afforded by screens and input devices. What I began to discover, though, is that even our most familiar, most natural, most culturally-embedded interactions, are all technologically-mediated. 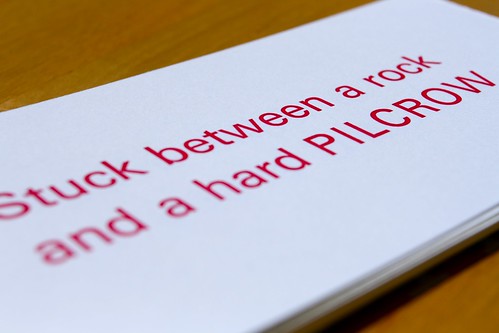 There is nothing natural about plain paper, dark ink or the printing press; these are all technologies. However, a book differs greatly from an e-book in terms of the richness of its physicality. Screens typically comprise an interaction that is physically impoverished, given the rich range of sensing capabilities we have as human beings. By not engaging our senses for texture, warmth, smell and sound, the e-book is limited in how it engages our sense of embodiment, but it is embodied nevertheless.

Indeed, too much effort has been wasted trying to explain how and why tangible computing is new and different than what came before it… what, intangible computing? I believe that the assertion is irrelevant, that tangible computing is not new, but as an area of inquiry it has given us a new perspective from which to reconsider all interactions, namely that of their embodied qualities. While tangible computing is mostly concerned with the sense of touch and physical manipulability, embodied interaction considers the larger notions of physicality as a whole, the human body as a mediator of experience, the nature of being, and the role of individual interpretation as central to the formation of meaning.

All interactions can benefit from an embodied perspective, not just analog, physical, in-the-world interactions, but so-called digital ones as well. There are all these things in the world, hardly perceptible but nonetheless important, that we use every day to create meaning.

What I continue to outline, through my consideration of embodied interaction, phenomenology and metaphor, is a means by which we can talk about these experiences in such a way that embodiment can better inform our design process.

I’m not there yet, but I’m continuing to work it out.

And now, I get to work it out with some of the coolest people in the whole entire world.