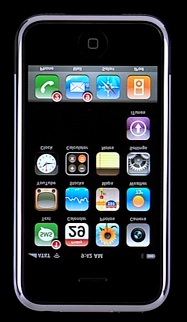 Have you ever flipped your iPhone upside down and tried to tap the buttons on the interface? You’ll undoubtedly miss most of the time. I’ve been experimenting with this, and it seems there’s a slight vertical offset between where an interface object is rendered visually, and where the screen correspondingly responds to touching that object.

Psychologically, you no doubt perceive that you’re tapping the buttons smack on the nose. In reality, however, it seems we’re prone to aiming a little bit below the object, perhaps because we’re subconsciously uncomfortable with obscuring the button with our meaty input devices.

Apple seems to have taken this psychological offset into account, and has positioned the touch boundaries for an object slightly below where it actually appears on the screen. You don’t notice it through normal use, but when you flip your phone upside down the difference is immediately perceptible.

It’s their meticulous focus on interface details like this that sets Apple apart from all other mobile manufacturers. If competitors do not quickly realize that it is the full user experience, and not just the touch screen, that makes the iPhone such an excellent device, their products will soon be as irrelevant as the Creative Zen. The LG Voyager is proof that a sack of crap, even dressed up with a touch screen, is still a sack of crap.

Also posted in Apple, Design | Comments Off on Flippin’ Phones