We have some sad news to report on the Hans and Umbach side of things. Umbach was soldering the other day, putting together our second Arduino Proto Shield from Adafruit, when he burned himself pretty bad on his soldering iron. Don’t worry, he’s a healer! 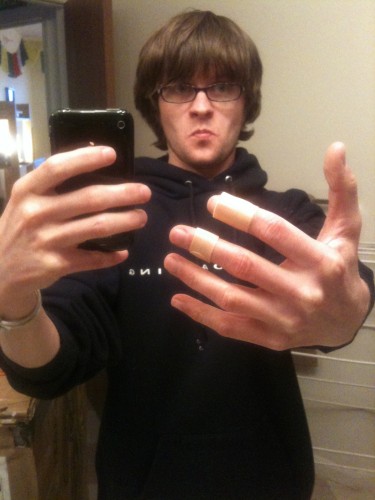 You see, Umbach keeps his soldering iron to the left of himself when he’s working. The strong affordance of the soldering iron seems to indicate that you should hold it like a pen, but of course that is a ridiculous notion. The long metal end of the iron is about a million degrees, and it will burn your skin in an instant. You should hold it not like a pen, but further back, like a… not pen… or a paint brush… or something. 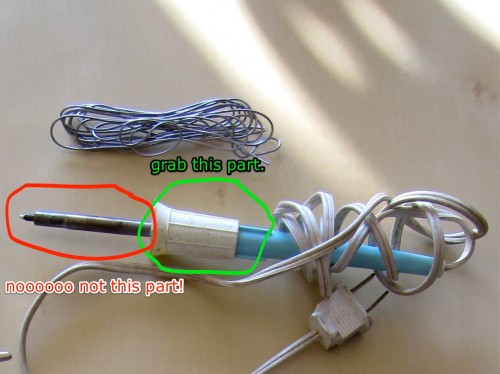 But then, even that is not entirely accurate. As you get more comfortable with soldering you realize, or at least Umbach has realized, that the iron is not the most important thing you wield in your hands. The iron merely heats up the area, and it does not require nearly the fine motor control as the solder itself. Indeed, the solder should be held in your dominant hand, so you can be as precise as possible with whatever parts you may be slagging in liquid metal.

Umbach was in his groove, grabbed his soldering iron in his left hand, and without thinking made to pass it to his right hand, as he would a pen. He grabbed it for only half a second, but it was enough to burn the back of his index finger and the inside of his middle finger.

There is a lesson here, and it’s not necessarily that Umbach was thoughtless, careless and stupid. As humans we are constantly filtering information, performing apparently routine tasks without deliberate thought. This is in much the same way that I am convinced no one actually learns Photoshop or Illustrator, but over time is able to unconsciously filter out the aspects of the interface that distract from their everyday usage. It’s an incredible ability, and one that frees up our mental capacity to dream of such awesome things as transistors, skee ball, and bears juggling chainsaws.

We go through life largely in a state of absorbed coping. In the case of Umbach, we see that this can get us into trouble sometimes. Grabbing the hot end of a soldering iron is clearly a poor decision, and had Umbach been consciously aware of the results that would inevitably follow from his actions he would never have done it in the first place.

But we are people, and as people we adopt certain habits that are applicable in certain situations. When these situations unexpectedly cross one another, such as the strong pen-like affordance of a soldering iron triggering the pen-like habit of holding, we may find ourselves with burned fingers. As designers it’s important that we deliberately consider what the form of our products communicate to our users, even unconsciously, and design in a manner that discourages the absent-minded adoption of an incorrect interaction model.

Or maybe Hans just needs to take over the soldering from now on.