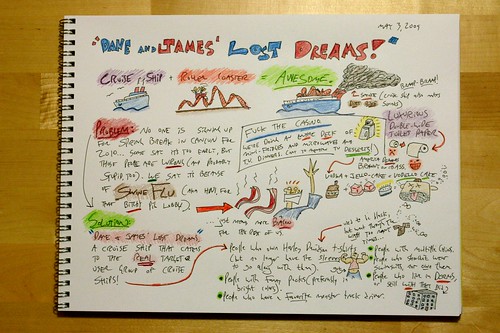 Chances are my handwriting is blowing your mind right about now, so allow me to translate:

PROBLEM: No one is signing up for spring break in Cancun for 2010… some say it’s too early, but those people are wrong (and probably stupid, too). We say it’s because of SWINE FLU (aka H1N1, for that bitchy pig lobby).

…just means more bacon for the rest of us.

SOLUTION: “Dane and James’ Lost Dreams,” a cruise ship that caters to the real target user group of cruise ships!

FUCK THE CASINO. We’re doing an entire deck of mini-fridges and microwaves and TV dinners. (not to mention TV desserts!)