This is Part I. Read Part II.

Over the last few weeks I’ve been working diligently on a few personal web projects, and what you have in front of you now is the most recent incarnation of Daneomatic, which was launched last night. There’s also a new version of Brainside Out, which has already been puttering about the neighborhood for the last week or so. 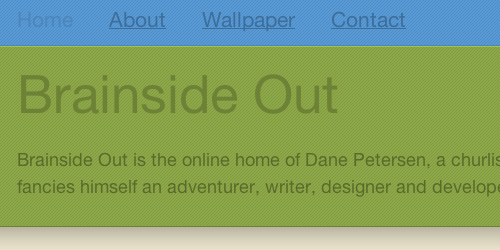 The original plan was simply to rebuild Brainside Out, but I was so fancied with the results from that project that I felt compelled to bring it over to Daneomatic. The act of “porting” the design and integrating it into the slapdash theming engine of WordPress took more effort than I expected, but I still figure a three-day turnaround from naked idea to launch isn’t that bad a churn.

The Problem With Supermodels

While it was definitely a fun challenge to piece together, in the end I was never too fond of the previous redesign of Brainside Out, launched in 2006 and codenamed Rosco. It always felt too heavy, confining and noisy. I was aiming for a funky private jet with shag carpeting and a rotating bed, and I feel like I hit a threadbare middle seat in coach. What’s more, the previous site was built to drum up work for an independent business that has since been pushed mostly aside to make room for a full-time job. This particular event happened more than a year ago, and if there’s one thing that supermodels, pets and websites don’t thrive on, it’s neglect. Unless they’re sea monkeys. sea monkeys dig that neglect shit. Kate and I are so gonna get some sea monkeys when we move into our new place.

More insidiously, the files that drove the Rosco edition of Brainside Out were intertwined with those for Siskiwit, the previous-previous version that was a weblog of sorts, a culmination of all the writing and web design I had done since 2001. The two sites existed side-by-side, confusingly wrapped around each other in a suffocating embrace, one stiff and businesslike, and the other bent low with a millstone of archives around its neck.

With the repositioning of Brainside Out as a business it didn’t really make sense, nor would it have been worth the effort, to bring Siskiwit and its thousands of archives forward into the Rosco design. Daneomatic would carry forth the Brainside Out weblogging tradition, but with five years’ worth of blood, sweat and tears put toward its name (or rather names, for those with ancient memories) I wasn’t about to nuke Siskiwit’s archives.

And so it came to be that I erected a crude scaffold around Siskiwit, allowing me to leave it fully intact while supplanting its front-facing views with Rosco. This worked. This worked just fine, and it very well would have continued to work if I hadn’t been born such a wild and restless child.

For years, up until just recently, all the sites I’ve built have been propped up with a laughably crude, but impossibly handy, PHP bootstrapper of my own devising. Calling it a bootstrapper may be too generous, as it’s nothing more than a glorified include file. Despite its inelegance it filled that void between “static website” and “dynamic template engine” with remarkable effectiveness, to the point that there was never really any incentive to improve upon it.

I’m a control freak when it comes to file structures and resource hierarchies, and as a code snob I am loathe to subject myself to the default outputs (or, gasp, the default layouts) of anyone’s content management system. With my simple bootstrapper I could build and deploy a site extremely quickly, all the while putting everything precisely where I wanted it to be. I wasn’t about to adopt another convention until I discovered something that was remarkably better.

And then I discovered something remarkably better. 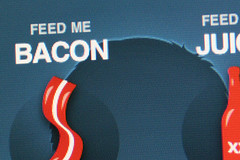 During SXSW I shared my experience with building Bixby Heart Dot Com (that’s B-I-X-B-Y Heart Dot Com) with the EllisLab folk, but unless you were one of the twenty people attending their open panel, this anecdote likely bears repeating.

Jake and I had limited time to work on the Bixby Heart project and we wanted to get it out the door in time for SXSW, so throughout our development process the focus was always on “light is right”. Jake is one of the most talented designers I know, and I’m a great front-end (and lousy back-end) developer. Thus, perhaps inevitably, Jake did all of the design and much of the front-end development, and it somehow fell to me to write the back-end code. Yikes.

I wrote all of Bixby Heart in PHP, and I felt I did a fairly decent job at it. I compartmentalized all my functions and fine-tuned them for robustness. In the interest of simplifying the development process, one of my earliest decisions was to use flat files, rather than a database, to store incoming data. Databases are one of the most fickle, insecure, time-consuming and misunderstood subjects of web design, and I wanted nothing to do with any of it. I figured if I sidestepped the issue it would just go away.

Boy was I wrong.

I set up a buffer flat file that intercepted incoming data, and rotated every few minutes on a cron to dump its contents into the primary flat file. At first it recorded boolean values for “bacon” or “juice”, and soon it recorded timestamps along with them. Then it recorded IDs to prevent writing the same entry multiple times. I’d parse the flat file with string compares, searching for tabs or newlines or what-have-you. I even set it up to increment through the contents of the flat file, in case it became so huge that the entire file couldn’t be held in memory at once.

It was when we actually wanted to do something with the data that it all fell apart. Display the number of bacons? How about the number of juices? Oh dude, how awesome would it be if we could graph the heart rate over time! Say, do we even know how to compute the current heart rate?

SXSW was in two days and I was at an absolute dead end. We were taking in test data but I couldn’t figure out how to work with it in any reasonable fashion. I tried tweaking the flat file setup. I tried setting up a database. I panicked, and even tried installing Pear DB. Before long the entire application was completely fucked up and I didn’t even have a working copy to roll back to. In a single night we went from having a semblance of an application to having an unmanageable rat’s nest of broken code. It could not be saved. I gave up. I gave the fuck up. I cried and screamed and pummeled at my pillow with tiny little fists.

And then I found CodeIgniter.

CodeIgniter is a lightweight MVC framework, brought to you live in PHP by the same guys who gave you ExpressionEngine. I had installed and tinkered with CodeIgniter before, and of all the application frameworks I had experimented with (CakePHP, Symfony, Django, Rails, etc.) it was by far the most clearly documented and easiest to install. It’s worth noting that the upcoming version of ExpressionEngine is written entirely in CodeIgniter, and it’s so hot it will make you cry. With less than 24 hours between us and SXSW, I realized that this was our best, and perhaps only, chance of finding a database class that would suit even our meager purposes.

I decided I would give it a shot, and eight hours later I had completely rewritten Bixby Heart in CodeIgniter. We had a fully-functional application to bring to SXSW. I built all the necessary database hooks, and Jake thusly grabbed them and wrote the front-end hotness. Before long we were soaked in whiskey and vodka, presenting Bixby Heart Dot Com to a private audience as we struggled to keep our balance in an RV lumbering through downtown Austin.

After that experience I decided any application, nay any website, that I built from thenceforth would be written in CodeIgniter or a suitable equivalent. I make a lousy zealot and thus am open to other options, but as an individual I have by far made the most progress working in CodeIgniter. When rebuilding the Big Winds website in Ruby on Rails I worked with Jason Ives, a talented local developer, but without his canny knowledge of server configurations, database schemas and all-around Ruby l33tness, I am but a lost little puppy.

And so it came to pass that the new version of Brainside Out is written in CodeIgniter. In its current state it’s skimpy as far as content goes, and I’m still debating how best to go about resolving that. The site still suffers from a modest identity crisis, especially since the majority of my web activity has moved offsite, but now it is far less confused than it was during the “is a business, is not a business” phase. More than anything, I needed to shrug off the yoke of all its legacy innards, and figure out an elegant way to store that stuff elsewhere.

And that, my friends, is our next story.